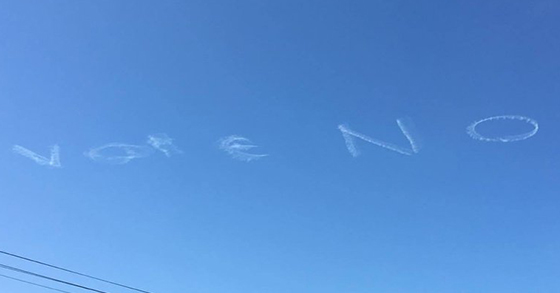 A self-described “rainbow warrior” who proudly tells anyone who’ll listen that she has “a lot of gay friends”, has announced she’ll be voting against same-sex marriage in the postal plebiscite, after being convinced by the “vote no” skywriting in Sydney today.

“No amount of reasoned arguing could change my mind but something about seeing it written in the sky several times really got to me,” she said, adding that the entirety of her aggressive yes-campaign protest group was now in the process of updating signs and chants in preparation for agitating for a “no” vote.

However, a poll has shown that the sky writing stunt, which cost millions of dollars, will make no difference to the outcome of the vote, with an equal number of people who had been planning to vote no reporting that they were now switching to a yes vote because they were “sick of being told what to do”.