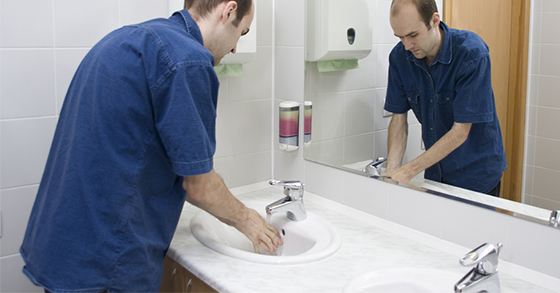 A Sydney man today has been forced to wash his soiled hands with soap and water after a colleague walked into the bathroom just as he exited his well-used cubical.

“Talk about bad timing,” the man said. “Now my hands smell like I’m some sort of fruit who wears fancy perfumes. It’s disgusting.”

A human-resources representative sympathised with the man but noted that there was no way of avoiding the “unfortunate incident”.

“We understand that the victim did the right thing and waited until all toilet patrons had left the bathroom before exiting the stall, but then this other bloke burst in out of nowhere and made eye contact with the man, forcing him to make a show of washing his hands,” the HR spokesperson said.

Staff were horrified when notified of the shocking incident.

“Christ,” said one man. “I’ve heard those taps have enough germs on them to take your hand off. It would’ve been better to wash his hands in the urinal with a trough lolly.”